That being said, one can notice the importance of professional interpretation most when translation mistakes are made.

6 Translation Mistakes that Prove the Importance of Professional Interpreters

In China, a restaurant owner attempted to translate his restaurant’s name and received an error. The Chinese word for “restaurant” into English came back from the AI machine translator as “Translate server error.” Thus, the owner named his restaurant. 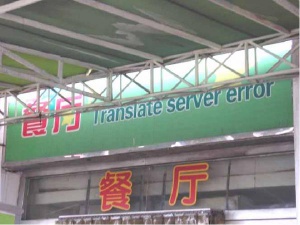 Maybe a small company’s translation error can be understood, but what about a giant corporation like Pepsi? Yes, even large companies make translation errors like this one when they translated “Come Alive With the Pepsi Generation” to Chinese. Unfortunately for Pepsi, it had translated incorrectly as “Pepsi Brings Your Ancestors Back From the Grave.”

Back in 2009, HSBC bank spent over $10 million on a rebranding campaign. Why? In attempts to repair the damage done from their catchphrase “Assume Nothing” incorrectly translated into various countries as “Do Nothing.”

Finger lickin’ good. Too bad the giant fast-food chain mistranslated their famous slogan in Chinese as “Eat your fingers off.” They were able to correct this after realizing the mistake, but if they had a professional translator in the first place, they could have avoided heavy financial losses.

Businesses aren’t the only ones to suffer from misinterpretations. A hospital ended up cashing out $71 million in settlement money for delay in proper treatment after a bilingual staff member incorrectly translated “intoxicado” as “intoxicated.” A professional translator would know that “intoxicado” is more closely referring to “poisoned” and not alcohol or drug-related. The delay of the food poisoning treatment left him quadriplegic and $71 million richer.

Even the foreign exchange market can benefit from professional interpreters. After a poor English translation of a Chinese financial report, the market panicked thinking the report was severe when it was actually quite speculative.

Whether a small business, large business, a giant corporation, politician, medical, federal, or religious entity…professional interpreters are a necessary investment. One simple mistake in translation can cost far more than the prevention of that mistake from hiring a professional translator. If you’re interested in translation services, contact Atlas Language Services to get the best solution for your needs.