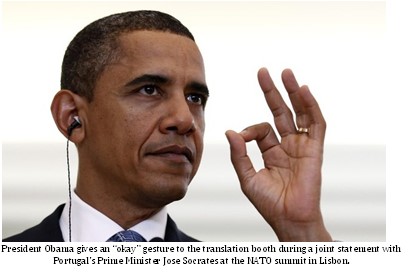 President Obama made the news recently due to a malfunction in the translation equipment that left him in the dark. The wireless audio feed that sends the interpreted language to the President ceased to function. So, the only thing President Obama could do was smile and nod at the Prime Minister of Portugal, Jose Socrates.

“With the two leaders standing together, [Prime Minister] Socrates launched into a minutes-long discussion of the U.S.-Portugal relationship. But unless Obama brushed up on his Portuguese before landing, he couldn’t understand a thing. An audio feed that pipes English translations through an earpiece for the president and U.S. reporters failed.”

This mishap tells us two things…

First, all equipment, no matter how meticulously tested and re-tested is bound to fail at some point. We can only hope that it is not when it is truly needed! I’m sure that due to the importance and high-visibility of the meeting that all equipment was thoroughly checked multiple times before it was to be used.

The second point that needs to be made is that the people responsible for the simultaneous interpretation equipment should have simple and clear instructions that can be acted upon in case of a failure. These instructions should be relayed and agreed upon both by the interpreters as well as the speaker being interpreted. When it comes down to it, you don’t want your audience missing out on what’s being said…especially a President.

As any company who handles simultaneous conference interpretation and conference interpretation equipment rentals and sales can attest, always expect the unexpected and have a contingency plan. So what could the interpreters and equipment technician have done? Well, these are a couple options that we have used at Atlas Language Services. We typically have at least one or two Portable/Tour Guide units preset to coordinating channels. These portable units can be a lifesaver if in a bind. Also, they can pick up where the stationary equipment left off.

The other option would have been to have one interpreter exit the booth and sit/stand next to President Obama and “whisper” interpret. Although neither option is ideal, they could have helped remedy the situation.

It is a situation that everyone dreads but how the technician, project manager or interpreters take control and handle it is what separates them from all others.

Kevin McQuire is the President/CEO.